A few days ago I went up skiing with my Dad and one of the young athletes on our ski team. It was windy, and snowing, but the three of us set up ropes and a GS course on the NASTAR trail reguardless. Dad and I would slip each run trying to keep the course trainable in the soft snow, and she would ski the course, get her feedback from her run, then work on things all the way down to the lift. It took me back to all the days spent training with just Dad and I. Whatever the conditions good or bad we would train and find a way to make it work. I can remember setting Slalom in 12 inches of new on top of soft groomed and training on it all day. It was pretty interesting occasionally but definitely worth every bit of the time and I wouldn't trade those memories for anything! It was fun to see someone else getting the same experience and eating it up! Hopefully in the future this will be as fond of a memory for her as it is for me.
Posted by Scott Snow at 9:48 AM 4 comments:

Well, I'm home!! I woke up one morning in Solden and was told we were calling it due to weather and we would be hitting the road in a hour and a half. So here I am 29 hrs of traveling later sitting in my living room playing guitar and hanging out with the family. It is always great to come home, and I am so looking forward to skiing at my home area, Schweitzer Mt. Resort, this weekend. I hear its been dumping so we will see if I get any formal training or just have to put up with pow skiing!! Either way I'll take it! The ankle is doing a lot better and hopefully will be back to 100% here in the next few days! 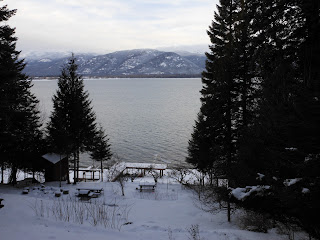 Home Away From Home!

Well, I've had two great days of Slalom races in the past week, and one not so great day of GS that took me right back here to the US Ski Team home base in Solden, AUT for a few days off skis. I took a pretty sweet digger a little ways into a GS run in Kirchberg, AUT the day before yesterday and bent my ankle a little bit further than it was designed to. It swelled up a bit, creased the plastic on the cuff of my boot, and kept me from running the night Slalom in Westendorf, Austria that I was very much looking forward to. I was pretty bummed, but what can you do? I am skiing really well in Slalom right now which is something to be happy about, and am stoked to figure out GS before getting home to the NORAMS in Colorado the first week of February!

I went to the gym today and had an awesome workout with my buddy and fellow D-Teamer Brian Mclaughlin! Gettin' huge!! With this all this time in my hands right now I figure it would be a shame not to put it to good use! 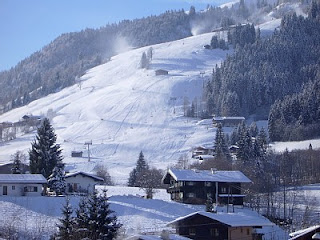 This is a photo of Kirchberg, AUT, the site of the GS race.
Posted by Scott Snow at 12:27 PM No comments:

We left Solden and our home base there yesterday for another Oberjoch adventure, and thankfully this time it was a racing one! The last few days of training were invaluable preparation for this block of 5 days straight of racing. The snow was pretty solid and the weather was beautiful if not freezing, windy and somewhat miserable to be lapping in wearing only a speed suit. All in all great stuff!! Tonight was a night SL here in Oberjoch, Germany and my first ever. I threw in some cross country action on the first run and ended up starting DFL second run (if you were wondering that means last.) I skied really well and was over all very pleased with my performance. We just got back to the hostel now and I am so beat!! Can’t wait to get some sleep!

Yesterday was the first sunny day we've had since coming over here 10 days ago, so we took full advantage. We had a 30 second course up with timing and got to lap it basically as many times as our legs could take! I was right in there time wise and am excited about my skiing right now. Can't wait to get back into some races!! 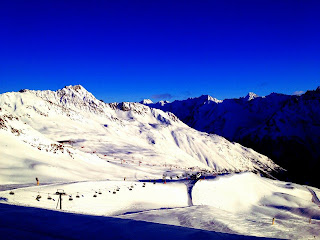 Copyright Nick Krause Photography
Here is a shot from the top of the lift taken by my man Nick Krause on his i-phone. Amazing technology in phones these days!!
Posted by Scott Snow at 4:28 AM No comments:

Well, after 3 days here in Solden, AUT we still haven't had a day of scheduled training. However, no scheduled training doesn't meant that we aren't getting just as much out of this time as we would be in gates. The coaches decided to employ the "Alternate Training Option" for this week, and I think it is working out wonderfully! The powder skiing has been fantastic and the snow just keeps on coming! I spent all day yesterday skiing awesome lines with my overgrown buddy Bryce Bennet and had a blast! Coming from the land of heavy snow, it was pretty sweet to drop a 20 foot cliff and not even feel the impact upon landing. I could get used to this!! But alas, good times end tomorrow with training up on the glacier. What a hard life... I guess I'll just have to find some way to cope!
Posted by Scott Snow at 6:47 AM No comments:

Yesterday we had a leisurely morning then got in the vans and traveled from Oberjoch, Germany to Solden, Austria. It was a whiteout blizzard and due to the slick roads, the lack of street signs over here, and our lack of directions, it took an extra hour and a half to cover the last 3 miles.  A large part of that was the golf cart sized drive that leads 300 yards through a field to the hotel. We went from ditch to ditch shoveling and pushing alternately, as the van slid around in the 60 mph winds whipping the snow off the banks next to the road. Once we were settled in, had dinner, and were in warm dry clothes, we looked outside and all thought the same thing. “Lets build a booter on that hill over there and hit it in the dark!” It was pretty awesome! We built it where there was about 50 feet of landing zone before the hill flattened out, plenty of distance, and where the wind had blown in a lot of snow(It had to be 3 or 4 feet deep in spots.)  Tanner, the crazy kid on the D team, threw a double back flip and stomped it which inspired me to give it a whirl. (I’ve never gone inverted before on skis unless by accident, so I thought I would go for trying a single back flip and leave it there for the time being.) I was honestly pretty nervous standing at the top of the run-in looking down at the dark silhouette of the jump, framed by the parking lot lights illuminating the landing. But what does worrying about it do? So I went for it. The first three times weren’t that pretty, ill just say that. Got the wind knocked out of me a little bit, but other than that it was like landing in a foam pit. The fourth time was closer, and the fifth time I crushed it and was so pumped!  I have always wanted to do one, but hadn’t to this point found the right time and place. Who would have thought it would be Austria during a racing trip! Looking forward to more such excitement the next few days!
Posted by Scott Snow at 9:09 AM No comments:

I flew into Munich yesterday morning and then drove to this lovely spot where the team was supposed to have a race today. It was canceled, due to the rain and poor visibility, which leaves me typing this from a comfy chair with a great view of the northern Alps here in Oberjoch, Germany next to a fireplace with a cup of tea while staring out at the rain. Life could be a lot worse! While waiting at the startline for the jury to make a decision I was delighted to see one of my good Austrian buddies that I know from Whistler Cup when I was 14, Christian Juffinger. We ended up freeskiing together for a while and had a great time. Now that I am back at the hostel, I'm about to go work out and grab a bite to eat before going out and exploring the town!
Posted by Scott Snow at 2:11 AM No comments: