After all the excitement in Beaver Creek, I traveled up to the land of "Eh's" for the first speed NORAMS of the year in Nakiska, Alberta. I have raced tech there in past years and so knew the general layout of the mountain and what to expect from the hill. (Let's just say after spending a week on Birds of Prey THIS hill didn't really put the butterflies in my stomach.;) I scored in two out of three SG races and got a ton of confidence back in my SG skiing. However that's not all that improved this week!! My hockey skills are getting quite a lot better as well! Each day after skiing we would go out to the rink behind the hotel and have a pick up game with all the Canadian boys for a few hours for dryland. I was so beat!(in more ways than one.) I swear some of those kids come into this world wearing skates and with a stick in hand.. Anyways, I had a blast with it and am looking forward to more of the same in the future!

In life in general, I think our opinions are dictated by our perception of things. I am always asked the question, "What is your favorite mountain other than Schweitzer?" and can never give a straight answer because my experiences at the different places I travel strongly affect my opinions of them. Some people remember their favorite areas for the trails, the views, the friends they share it with, or myriad other things. I tend to remember places by their food... And this trip Nakiska took a serious blow on its record. Each day we ate breakfast and dinner in a huge conference center with a buffet line. There were about 150 athletes and coaches all enjoying(or not) the same fare, and as far as I know about 140 of those came out the other side no problem. The other 7 percent of us ended up with two days of our heads shoved into toilets checking out the contents of our stomachs. It struck me the last day about 15 minutes after the completion of the SG portion of the Super Combined. Some of my buds were telling me not to run the SL portion because I was getting sick all over the place, but isn't that why we are here? I mean why waste a perfectly good oppertunity? So I did run the slalom and somehow kept everything inside of me for 41 seconds of attempted athleticisim. Even though I was sick I still skied pretty well and had a decent result all things considered! Something to build off for sure! =) After that I headed off to Panorama, Brittish Columbia with my head out the window for a much needed day off followed by a week of awesome racing!
Posted by Scott Snow at 10:22 AM No comments:

When I was 6 years old, my family went to Beaver Creek for the NASTAR National championship. While there, my father insisted that we go up to the top of the mountain and check out the World Cup Downhill track called Birds of Prey. It was mid season so the hill was all steep moguls and really took it out of the legs. So about half way down when we stopped to catch our breath and my dad looked at me and asked me if I could imagine tucking down this crazy mountainside. I just shook my head and said, "No Way!!" Little did I know that I would be doing just that 12 years later! 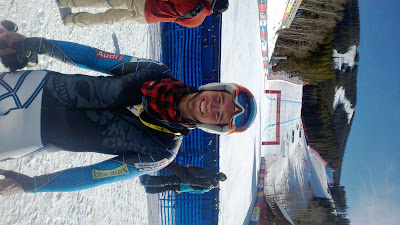 ﻿
I got to forerun the first two days of the World Cup DH in Beaver Creek and had the best time of my life! Every run I came through the finish with a huge grin on my face just hoping to get another crack at it if there was a course hold. It was definitely one of the coolest experiences I have ever had! I was a bit nervous the first run for the left footed cooridor on the pitch called "Talon Turn." It is 52 degrees at its steepest and is quite intimidating. After I made it the first time and realized it was skiable for us mortals as well as the legends on the startlist there was nothing more exhilerating or fun on the planet. (Having my Dad there to watch was really great too. It's always nice when your family can come to an event to watch. Makes the whole thing that much better. :) I skied really well and hopefully will get some DH starts when we go to Europe in January as a result!
Posted by Scott Snow at 8:49 PM No comments:

The first NORAMS of the year were a great success!  I skied really well in all four races and finished at both Loveland and Aspen! (That's the first time in my career I have finished tech races at either of those resorts, so I was very pleased.) The conditions were great for this time of year, but running around 80 every day left the track a little bit haggard. It made for a pretty great challenge!! I knew coming into these races that I probably wouldn't come out with a score, but it was a really good confidence builder to ski well and perform in the first big races of the year. I am really looking forward to building off of this in Canada!
Posted by Scott Snow at 4:53 PM No comments: