What can I say, it's the East!

Well, it hasn't exactly been a ski racer's dream week up here in Le Massif, Quebec. The first two days of DH training were canceled due to warm weather, poor visibility, and a lovely, early morning lightning storm over the mountains. After that, Mother Nature completely made up for her apathetic view towards the previous days races with perfect weather conditions; blue skys, and 75 degree temperatures. What a mess! We got a training run off, but everything that wasn't salted turned to slush by 8 A.M. 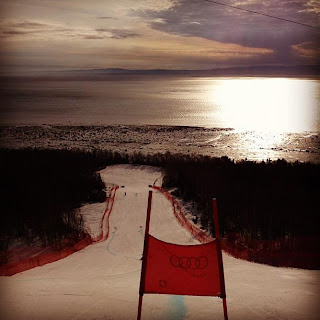 This was taken by my long time buddy Andrew Kircher at 7:30 A.M. during inspection. (Note that the sun is already pounding on the entire slope.)

The race day was somewhat of a let-down for me. I was starting 11th, had skied really well in the training run the day before(finishing 5th,) and was really pumped up to be getting another race opportunity in speed. I had a pretty solid run and was in fourth after 16 people came down. Then, after a decently long course hold, they canceled the race due to rocks showing up in the track. Even though there was nothing anybody could have done to avoid this, I was still pretty upset. I haven't scored yet this year in DH, and letting any opportunities slip by in speed is really a waste. Fortunately I get a few more shots at the end of the season, so it's not over yet!

The organizers thought we might be able to run GS on the hill a few days later, but none of us were convinced when we got off the lift the next day... 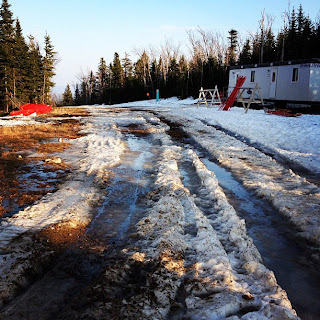 This was a cat-track the day before. I'll give the coverage an A-.
(photo by A. Kircher)

Now I have a few days of training before two SL races just down the road at Mt. St. Anne. It is still super warm out, and is supposed to rain tonight, so we'll see what the morning brings! Hopefully it will feel a little more like winter in Canada!
Posted by Scott Snow at 6:59 PM